About Gozo
A Glimpse of Gozo
Population
Mythology
Culture
Countryside
Why Gozo?
eco-Gozo
A major Dive location
Most dive sites are located in Gozo

Gozo, which in Maltese is called Ghawdex (pronounced: Awdesh), is a derivation of other older names such as Gaulos. It has an area of 67 square kms, is 14 kms long and 7 kms wide. With a coastline of 43 km, it is the second largest island of the Maltese Archipelago that, together with the smaller isle of Comino and the main island of Malta form the Republic of Malta.

The Maltese Islands are situated in the centre of the Mediterranean – 93 km south of Italy and 290 km north of North Africa. Gozo lies about 5 km in the North West of Malta and the distance between Cirkewwa in Malta and Mgarr Harbour in Gozo, involves a 25 minute ferry crossing. It therefore enjoys warm summers and mild winters and this makes it the ideal holiday destination at any time of the year.

Being a small Island, and with 13 villages dotted around the island, there is diversity in terms of village cores, restaurants, beaches and coves, and yet nothing is too far away to require planning a trip.

A Glimpse of Gozo

An excellent video on Gozo provided by eco-Gozo. Enjoy the trip!

The population of Gozo stands at about 32,000, about one-twelfth of the overall population of Malta.  When compared to the overall area of the Maltese Islands, Gozo covers approximately one-third of that area. This means that the island of Gozo is not overpopulated, and therefore greener and quite more peaceful.

The official language is Maltese, which is spoken, in distinguished dialect that amazingly differs slightly from one village to another.  As applies for the whole Maltese islands, the language has Semitic origins and Romance influences, while the English language stands as the second official language.

Traditionally the main sources of income have been from Tourism, Agriculture, Fishing together with a number of small and medium-sized enterprises in manufacturing and other activities.  Gozo is increasingly attracting IT related activities, including Research and Development and Innovation.  High standards of IT Education, training, and the provision of e-services is a key Government objective.  Examples of activities in this area can be found at ICT Gozo Malta

Malta is now served by an increasing number of low-cost operators making it cheaper and more accessible than ever before, allowing people to organise cost-effective short-trips and visits, particularly useful for property owners who wish to visit regularly throughout the year.

Gozo is popularly called The Island of Calypso, that is a nickname originating from the Greek mythological location of Ogygia referred to in Homer’s Odyssey. In this epic poem, the fabled island was controlled by the nymph Calypso, who had detained the Greek hero Odysseus for seven long years as prisoner of love.

The natural harbours, bays, creeks reefs, caves and wrecks offer a great variety of dives suitable for both the amateur and experienced divers. Marine life flourishes in abundance and include groupers, octopus, flying fish, coral and eels.

Throughout the years Gozo has been vastly influenced by the cultures and history of a series of dominators including the Phoenicians, Romans, Arabs, Normans, Spanish, the Knights of St. John, the French and the British, who all left their mark on the cultural and the folkloristic heritage of the population.

The capital Victoria, lies in the centre of the island.  It boasts the dominant fortified old town and Citadel, two splendid churches, namely St George’s Basilica and the Cathedral dedicated to the Assumption of the Virgin Mary, several small churches and monasteries, two opera houses and various urban commercial outlets.

The Citadel is one of the most beautiful architectural complexes on the Islands.  Behind its austere bastions the Citadel hides a number of fine buildings, museums and the Cathedral.

Villages in Gozo reflect a way of life simultaneously rural and refined with superbly proportioned squares and carved balconies.  From the old traditional farmhouses with their typical archways to the most contemporary houses, the incredible amount of architectural detail is surprising in its creativity.  Balconies are embellished with balustrades, flowerpots, Georgian style facades, roof gardens and bougainvillea.

The citadel features a very old cathedral which is surrounded by the remains of old buildings, museums and the impressive defensive bastion walls where one can enjoy a wonderful panorama of Gozo.

Down from the Citadel one will find one of the main squares of Victoria which has the daily market place and numerous bars and cafes which serve traditional Gozitan food among others under the shade of the trees.

In comparison with mainland Malta, one finds a more varied geology and larger relief contrasts, with typical flat-topped hills.

The countryside is recognized by its traditional rubble walls and the prickly pear hedges peeping over or bordering terraced fields. Green hills and fertile valleys separate one village from the other. Wherever you look, the sea is always within the reach of the eye. In fact, Gozo has an amazing coastline with its tiny creeks, sand beaches, blue sea, majestic rock formations and protruding watchtowers. Low lying coastal stretches of limestone, are chequered with saltpans while high and dramatic cliffs trigger awesome emotions with their native blend of salty air and wild herbs.

At the foot of the cliffs at Dwejra, the Azure Window is the superb companion to another interesting landmark Fungus Rock upon which, recorded since the times of the Knights of St. John, grows a very unique type of fungus with alleged therapeutic properties. Close by, the Inland Sea provides a wonderful opportunity for a boat trip with a difference.

On the opposite side of the Island, look out for the unforgettable view from Calypso Cave overlooking the beautiful and distinguished red sands of Ramla Bay. Also for those who would not miss a chance for a swim, a short stroll, or just to relax, the crystal clear waters of Marsalforn and Xlendi bays beckon the visitor’s appeal. Furthermore, Marsalforn and Xlendi together with Mgarr Harbor are Gozo’s main fishing villages. Being an island, the fishing industry has been cared for since generations. No wonder that there is no bay, which does not shelter a variety of fishing boats and with several boathouses for their maintenance.

The national fishing boat is the colourful luzzu (pronounced ‘lutsu’) with its normally blue bulwark and with the eye of Osiris on white, red or brownish background on the prow. Especially when its calm, the reflection left by berthed fishing boats on the water inspires a lot of artists’ imagination. Most nostalgic is also the scene of vessels leaving harbour at early dawn, or while returning at sunset. The image of luzzijiet with their bows skimming through the calm blue water, leaving behind streams of silver ripples is simply unforgettable. The day’s catch is, apart from any romanticism, obviously the toiling fisherman’s most important aspect of his trade.

eco-Gozo is the Government of Malta’s vision to make Gozo an eco-island by 2020, supported by a keen and committed sustainable community. This vision encompasses four major areas: The Environment, Society, Economy, and Culture & Identity.

The objective is to see quality of life in Gozo improving further through education, economic development and social progress.  Gozo will strive to reduce its carbon and water footprints.

We want to protect the Gozitan lifestyle, the island’s environment, resources, culture and identity, and see that all these play a significant part in attracting more visitors and investors to the island.

The eco-island vision foresees a sustainable, and therefore, a secure future for the island of Gozo. It is a vision rooted in the island’s potential and the capabilities of its people.

EcoGozo is a vision for an island to become ever more beautiful, inspiring, welcoming, thriving, inclusive and successful. A healthy and successful place to live in, in equilibrium with the environment. This is essentially what eco-island will strive to achieve.

For more information on the eco Gozoinitiative, visit their website at www.eco-gozo.com .  You can also download a copy of the Eco Gozo action plan. 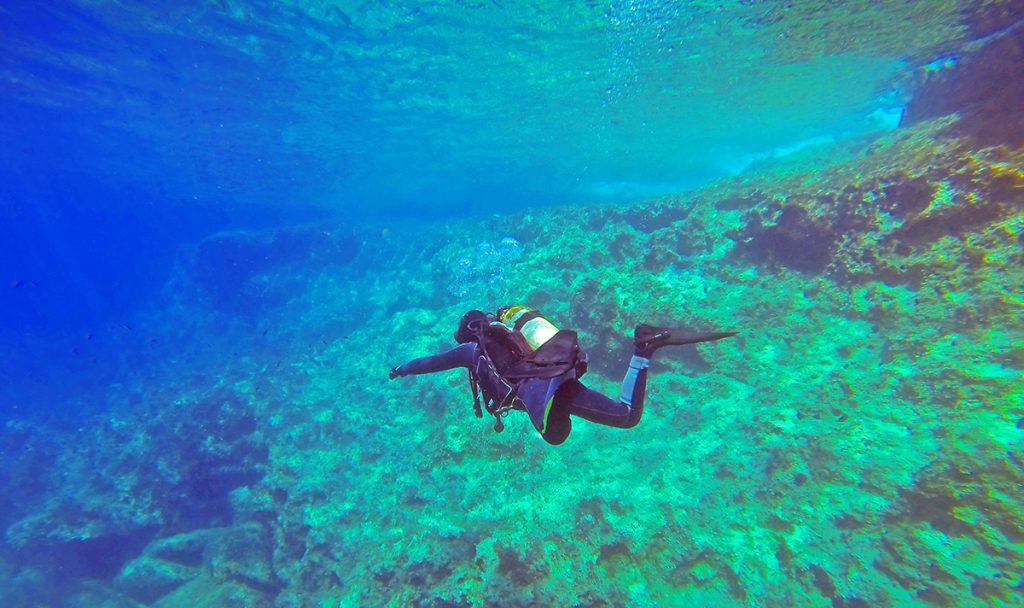 The three Islands that make up the Maltese Archipelago – Malta, the largest; Gozo, the mythical isle of Calypso; and tiny Comino, famous for its Blue Lagoon – form a very special diving site at the heart of the Mediterranean.  The Maltese Islands’ clear blue Mediterranean sea is ideal for scuba diving and is highly accessible by relatively every area of the Islands. All three Islands offer excellently unique diving experiences with reefs, caves and wrecks to make the dive one of the most interesting ones in the Mediterranean.

The Islands invite you to discover their natural harbours, bays, sheltered creeks, cliffs, reefs and wrecks. The waters here are some of the most limpid and clear in the world. Visibility is excellent down to around 30 metres. So Malta is a dream destination for underwater photography. Marine life flourishes in a vibrant display of colours.   The calmness of the sea makes for excellent visibility and the wildlife danger risk is extremely low, creating an ultimate location for first time divers and beginners. For the more experienced divers, there are various sites that include archaeological artefacts, some from WWII, some even dating back to the Roman era

With dive sites just a stone’s throw away from each other, you will be able to explore a variety of underwater worlds. There are many licensed Dive Centres on both the main islands.  Most of the best dive sites are located off Gozo.