Through the keyhole – Razzett with a view

Down a short wide alley off the main street in San Lawrenz, there’s a giant iron lamp beneath which an old wooden door hides a courtyard flooded with light and – in a country known for the extraordinary quality of light – seems to glow particularly bright. 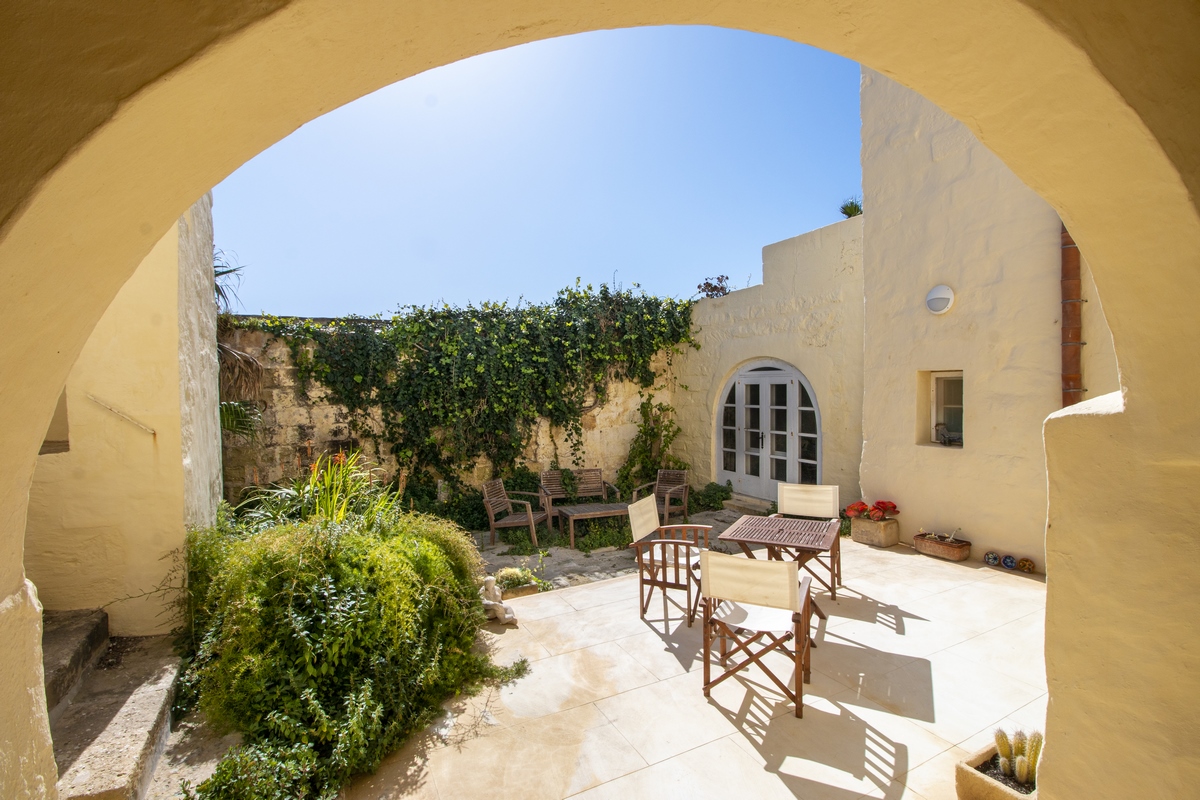 From a straightforward enclosed courtyard which is totally private, the external staircase rises up and back over a downstairs bedroom and modern bathroom: a small workshop halfway up was once the old kitchen. The new kitchen however is on the opposite side of the courtyard and stepping inside gives an instant indication that this traditional three-bedroomed farmhouse has a markedly different feel to most Maltese Razzett. 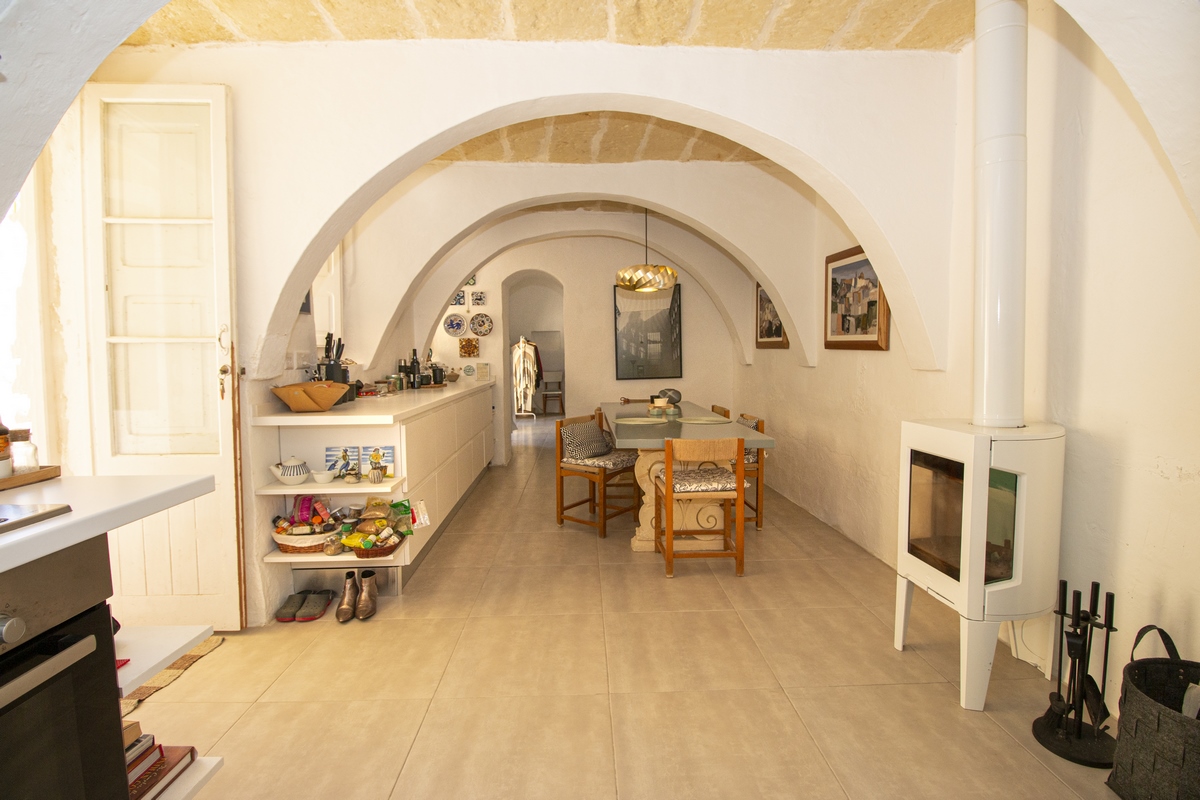 With white-washed walls, and occasional accents of blue tastefully scattered, this sleek yet pretty kitchen has the romance of a Greek island! There’s a large dining table of carved stone legs topped in a neutral grey which ties in with the silver elements of modern kitchen appliances and occasional tiles team blue with tiny touches of yellow. The windows are shuttered in white and to one side a stylish white woodburner adds interest as well as heat in the winter months. 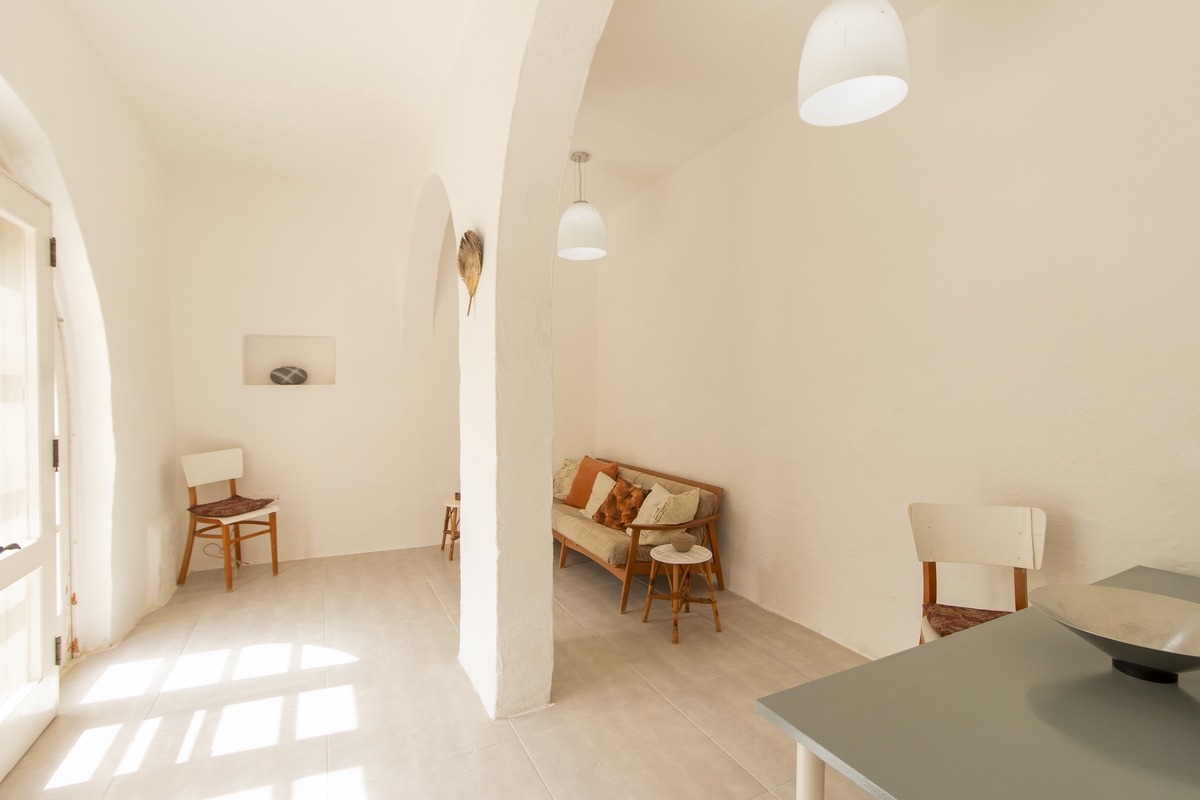 Beyond the kitchen, there’s a versatile room which also catches the morning sun. Its space divided by an internal arches, it could be a charming and intriguing office, studio, bedroom or playroom.

From the kitchen a traditional spiral staircase, a ‘garigor’ in white painted stone, rises from one corner to the living room above. 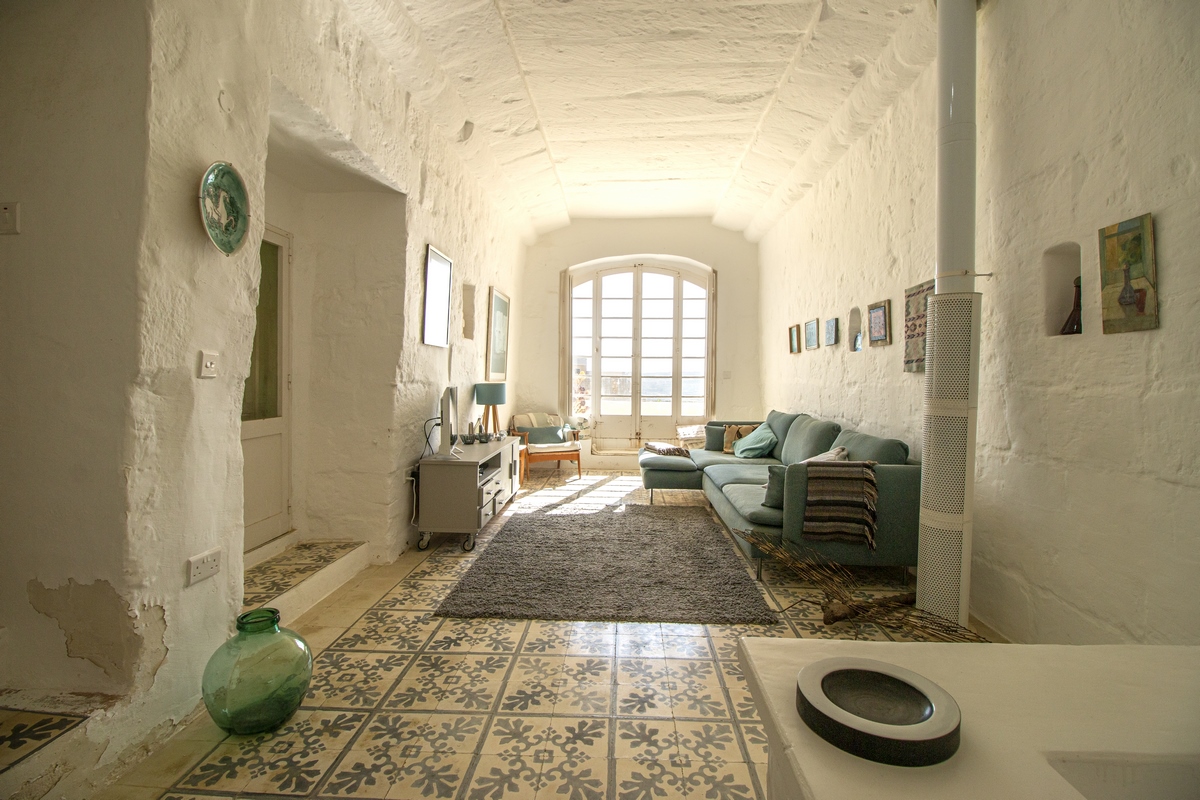 As you step into this space, your eye is inevitably drawn to the double doors at the opposite end of the room which open to a wide sky cleverly drawing it into the cool and serene white and blue styling that permeates the whole house. (Even the Master Bedroom has rare Maltese tiles in blue and white!). It’s a welcoming airy living room with fresh light Mediterranean flavour that is markedly different from the heavy fortress feel of many traditional Razzett and, whilst decidedly homely, could be found between the pages of any pan-European interior design magazine.

Step through to the external terrace and the view is breathtaking – you see simply age-old fields that drop down towards the sea at Dwejra beneath sweeping clouds. There’s a second outdoor seating area upstairs too, on the upper walkway where there’s room for a pair of chairs to settle in with a seaview and the entire upper floor offers an extraordinary view as the dropping winter sun paints the horizon in sunset stripes, its bold colour contrasting with the hues in this beautifully-tranquil house.

In addition to the Mamma Mia flavour of this enchanting house, there’s a second big surprise! Found in the large courtyard, which is currently an excitingly-blank canvas, tucked out of the main line of view beneath the old kitchen, wide steps lead down to a large underground cave! It has been suggested that these curved walls were hewn from the rock maybe 400 or even 500 years ago, quite probably for religious purposes, given the carved cross that can discerned by the cave’s entrance. Currently feeding a well, and now multi-pillared, this could become the funkiest wine cellar, media room, or even the most quirky home bar/coolest party space to add an alternative mood-space to this elegant abode.  Check this property out here.