Through the Keyhole – The Y-front

A distinctive quirky frontage introduces a characterful old farmhouse in the heart of San Lawrenz: through the original external door, the wide cosy entrance way is ripe for a large-scale conversation piece – currently a perfectly-restored antique Norton motorbike stands proud on the traditional flag stones opposite an old well beneath golden arches. 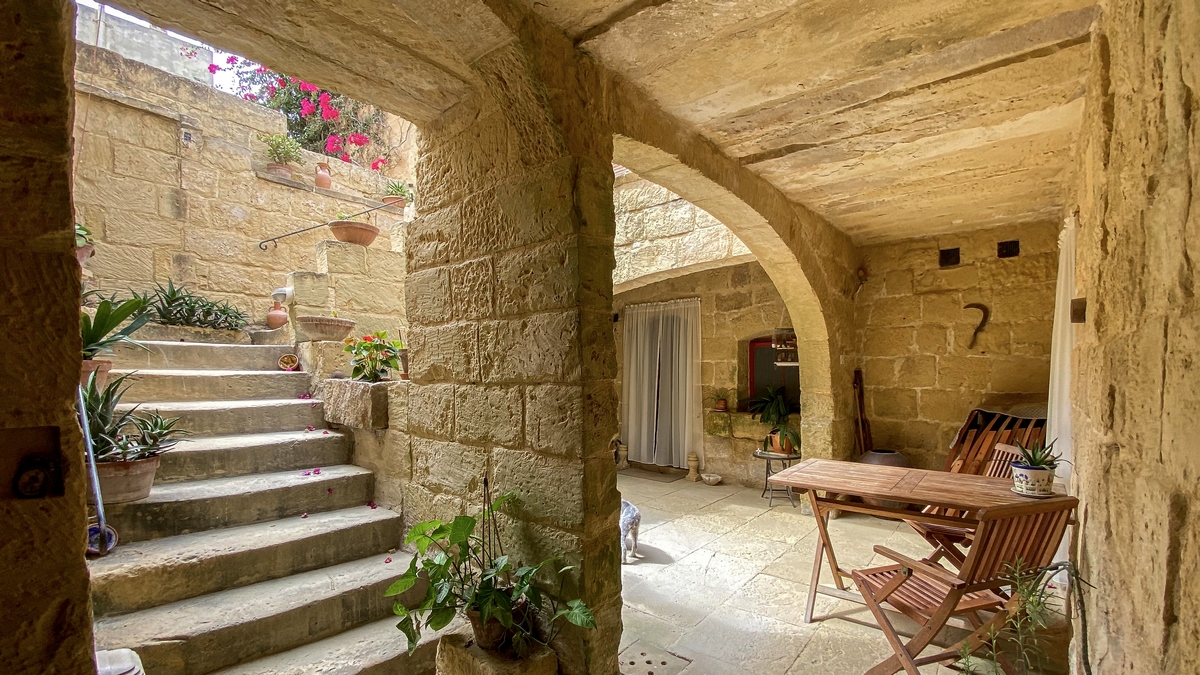 The hall leads to an intimate central courtyard with a cosy family feel:  three rooms wrap around two sides opening into the space, while through an arch an external staircase with planters on the balustrades completes the square.

The old living room has many traditional features from animal ties carved into the stonework to several votive niches beneath one of which a feature heating stove burns with a purple-blue flame. There’s also a series of notches cut into an arch that were, probably, used to note the passing of the seasons or births in days of yore. However there’s a more recent architectural motif in this house, newer elements that recall 60s modernist architecture, and the old and the new are teamed with a relaxed bohemian feel that flows throughout. An alcove at one end of the room has been whitewashed and a dais built within it to serve as a cushioned reading nook below which twentieth-century niches in this plain-square style echo the traditional features of the past. 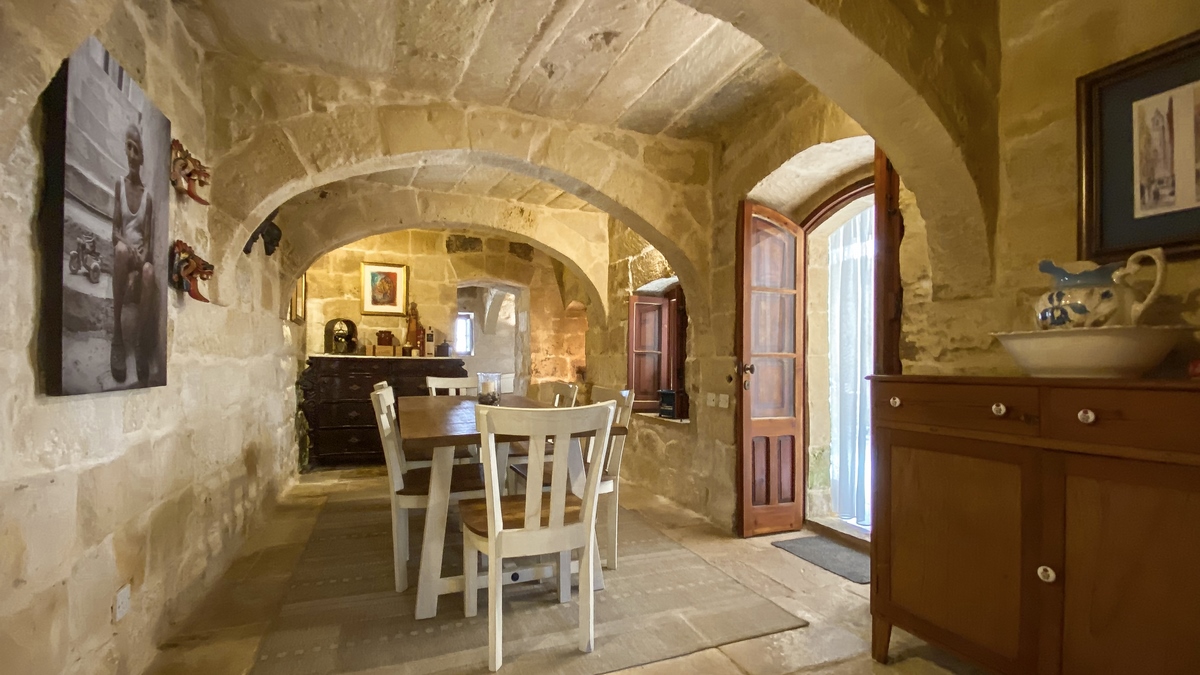 Leading from the living room, the dining room is archetypal Maltese, lit by doors and windows into the inner courtyard. The kitchen however, through a low arch flanked by age-old stone loops to which animals were once tied, once again blends the straight lines of cubism, characterful individuality and the full-on flavour of a country kitchen from years gone by (all with 21st century appliances).  With feeding troughs and a Belfast sink, high set windows and soft lighting, traditional tiles on the floor and the walls add wonderful colour to this snug space that oozes rustic charm. 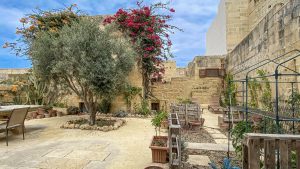 It’s a character that carries on in the courtyard in which the shutters are painted a lively red, and on into the truly rural garden beyond.

Here chickens – that could come with the house if you’d like –  live in a red roofed coop and lay fresh eggs every day. To one side, there’s a functioning well and small cottage garden in which to grow fresh vegetables, to the other an old olive tree stands against a wall of yellow bougainvillea and fragrant climbing jasmine. A large tiled stone dining table and a small banana tree complete rustic tableau.

Beyond, the fields roll down to Dwejra, and Fungus Rock can be seen over a line of prickly pear bushes, giving the sense – almost – of being on a clifftop. 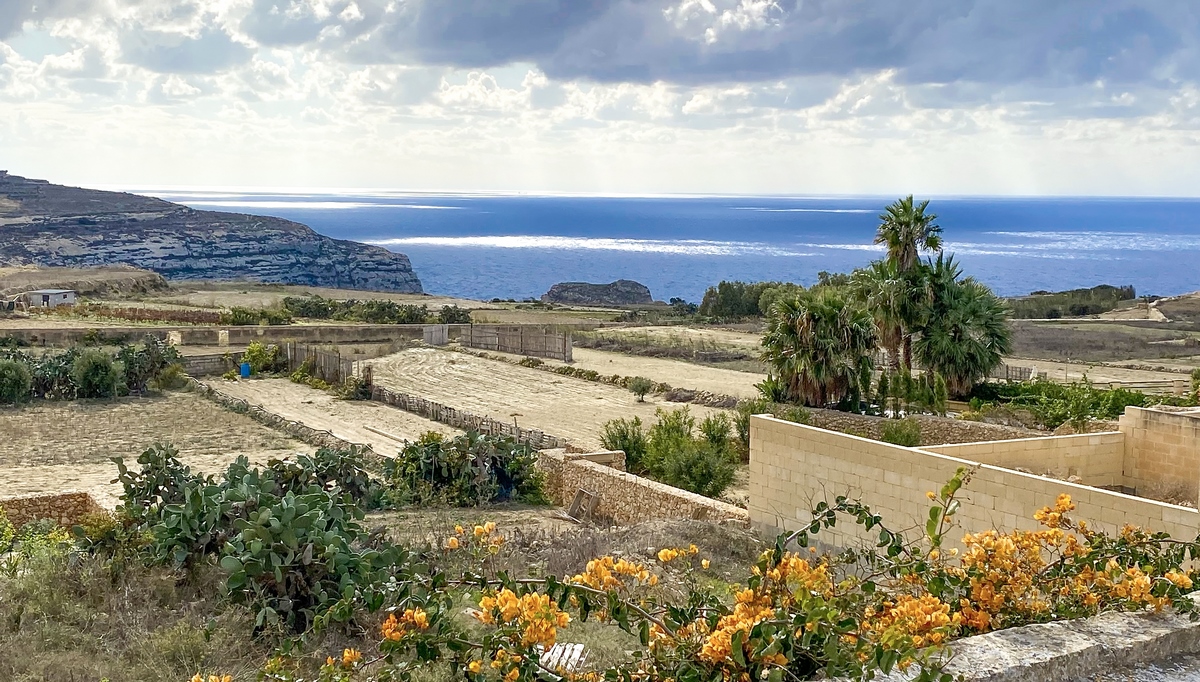 Stop awhile here at dusk in the winter and you can watch a fiery glow streak the horizon with orange, peach and pink before the sun disappears into the darkening sea. This vista includes the most uninhabited part of the island, and so this house is ideal for keen bird watchers. It is also a ‘dark sky’ heritage area barely touched by light-pollution in which the stars pin-prick the sky at night and so it’s also the perfect home for enthusiastic astronomers!

Upstairs there are four white-washed rooms, one of which, warmed by an oil stove in winter, is currently used for star-gazing. In the daytime, the sunlight reflects from the walls and highlights the gold of the traditional flagstone floors.

In the Master Bedroom, as well as an original old cupboard with stone shelving, there’s a modern built-in stone seating with a low square bench design: scatter cushions once again evoke the relaxed flavours of the 60s whilst remaining aesthetically  sympathetic to the shapes of the original building and celebrating the simplicity of previous ways of life here in the country. 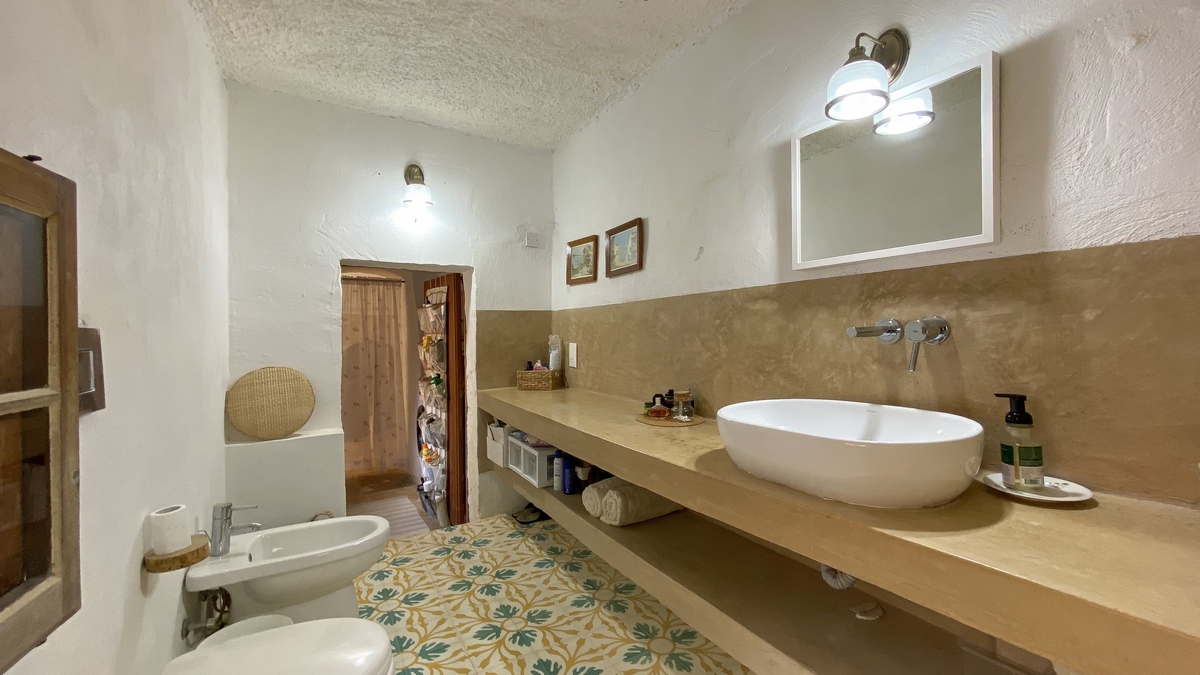 Look out too for a series of mini ‘Saint’ niches, glass-covered images, that add a further quirky element to a house already packed with personality.  Read more about this property here.