Through the keyhole – A finished gem – part 2

… The building that housed the old mill is now a hidden farmhouse, set at the end of a long driveway, and as you pass under the arched gateway, the drive opens out into a large courtyard, glistening white between ancient stone walls. Green foliage flourishes on all sides and a tall palm tree stands proud. Protected from the wind from whichever direction it blows, this oasis of calm provides a shady retreat along the front of the house, even in the height of the summer, and a wonderful view of the façade. It’s an friendly frontage on an island known for its fortress-like farmhouses.

Stylish iron twists decorate several windows and centre-stage there’s a traditional carved stone balcony from which you can imagine Juliet might peek down to her Romeo in soft evening light. To one side a bougainvillea winds its purple blooms up to decorate a self-contained studio-flat above the separate garage.

As you step into the house you immediately enter the main living space, a tall, light and airy room of impressive proportions: it was once a mill room 10m across the length, with large grinding stones. bigger and brighter than those normally found on the island, it hints at a prestigious history in this part of Santa Lucija.

The mill stones were driven by donkeys kept below, and should you wish, the space in which they laboured underneath can be accessed from small doors at the front of the house. Look above at the ceiling to find a stone loop through which rope would have been threaded for lifting loads, one of the old features in the walls that hint at the building’s heritage.

Last used for milling during the Second World War, the spacious room today is an immaculate combination of the traditional and contemporary creature comforts in a tranquil palette of ivory, stone-gold and dark wood. Between a series of up-lit floor-to-ceiling golden arches that span the space, comfy sofas in a sand-hued velvet draw the warmth of the stone’s palette into the heart of the room. Baronial iron light fittings add a touch of atmospheric grandeur whilst the pale marble floor, with its organic accents of red and brown, pull in the rich dark wood of the dining table and chairs and other pieces of furniture. And although the room is a peaceful haven in the quiet of the day, it is also rich with the promise: it could equally play host to a magnificent classy party.

From one end, a staircase rises to the floor above, stone steps lined with delicate iron, and leads to four bedrooms and what, long ago, was an external terrace with a decorated stone balustrade, but has long been roofed for easy-living all year round.

The bedrooms are simple whitewash – almost monastic in the peace they bestow – with the old golden flagstone floors and other traditional features. Look up at the ceiling and you can also see the traditional xorok and kileb roofing technique in which stone slabs (xorok; each measured to a Maltese standard, the qasba which is 82 1⁄2 inches) were supported on stone corbels (kileb).

In the bedroom to the front of the house, from which you can step through double doors onto the external balcony: over the old houses and roofs the view stretches from the cross atop Ta Ghammar Hill and Zebbug to the aqueduct as it stretches to Victoria in the east.  High in the wall of this bedroom, a traditional birthing  room is set under the dark wood beams. 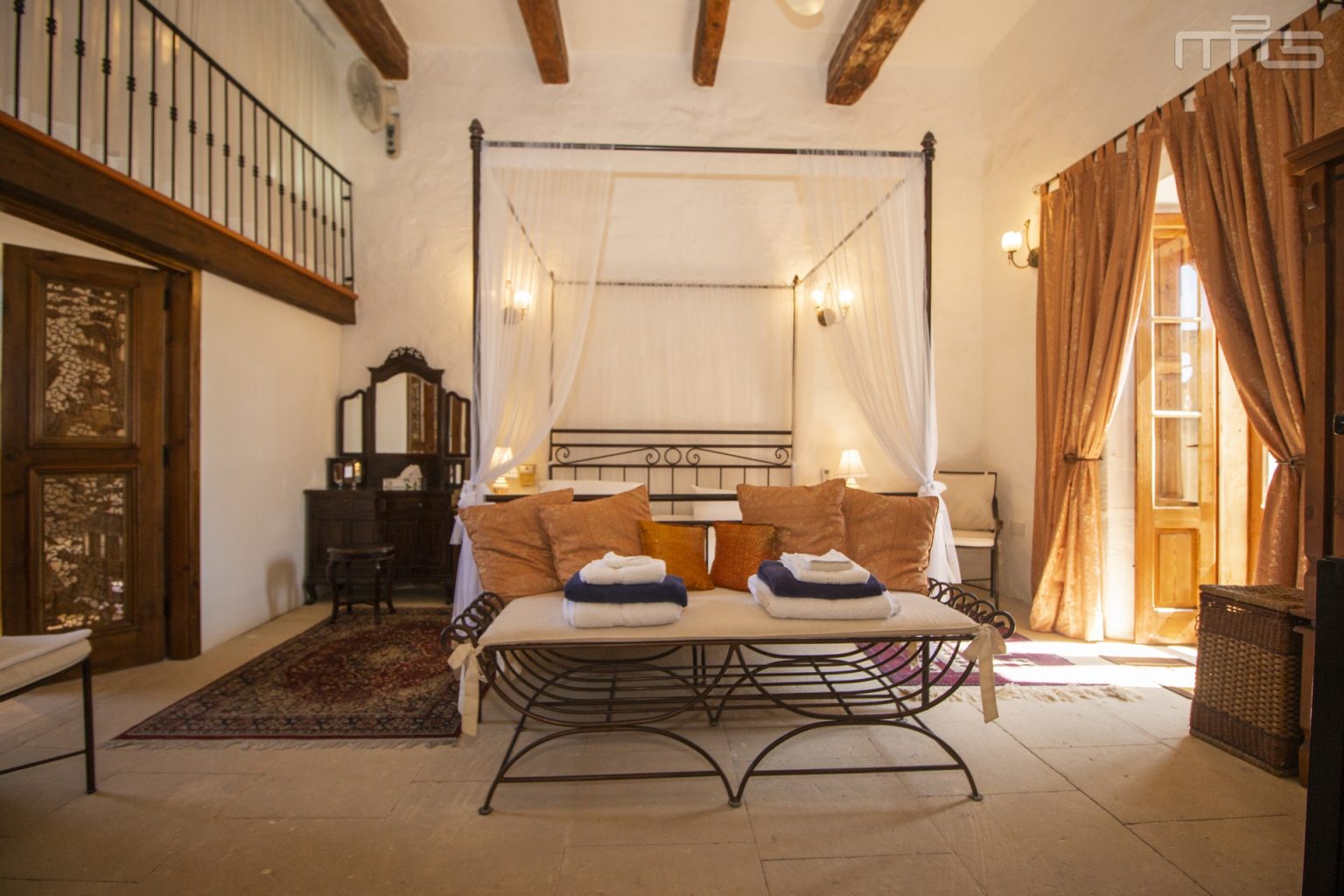 The Master Bedroom, is a striking finale to the houses interior: it’s a large tall space endowed with a feeling of serenity, a sanctuary with a modern four poster bed, its simple ironwork with wrapped drifting white chiffon.  To one side, striking feature doors to an en-suite bathroom have been crafted from antique Chinese panels adding an element of the unexpected as does a spiral staircase, leading to a modern ‘minstrel’s gallery’ room above which houses a single bed, curtained off with matching crisp white gauze. 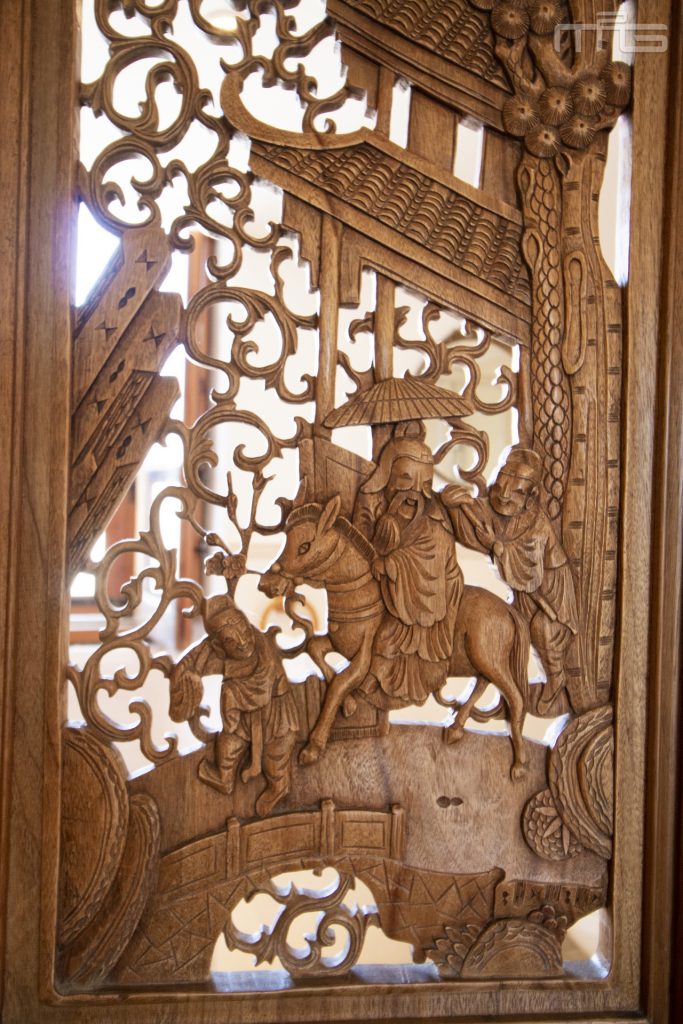 From this bedroom, double doors lead out onto a terrace and an external stone staircase that leads from the large back garden courtyard – complete with infinity pool – up to a second terrace with a wooden pergola overhead that runs the length of the back of the house.

Looking over the carved balustrade, there’s a surprise in store: having entered the house down a narrow-walled roadway, you’d imagine it was embraced on all sides by other village houses. Instead, behind the garden courtyard and the glistening blue tiles of the pool, the landscape is open fields leading across to the old Santa Lucjia windmill. On tidy terraces, strawberries, melons, pumpkins and other crops speckle the land in a seasonal cycle with green leaves and colour. Look left and you can see the Rotunda of Xewkija, the world’s third highest unsupported dome, in the distance, whilst to your right – although you feel in the middle of the countryside here, the bell of Santa Lucija Church in the heart of this hamlet, is only a few hundred meters away.  This property is now on the market for sale.